Nellie Rants - Shopping (Storyboard version) from David Butler on Vimeo.
Above is an Animatic of a short Animated film I have in Pre-Production. It will be a stop motion Animated film
Starring the lovable Mrs. Nellie Murphy and written  by Órla Mc Govern.
I am also delighted to have Sharon O' Neill on board to help design and make the various costumes and sets.
I have applied for Kildare County Council Film Bursary funding for this Project.
at 3:04 PM No comments:

Email ThisBlogThis!Share to TwitterShare to FacebookShare to Pinterest
Labels: Animatazz, Animation, In Development 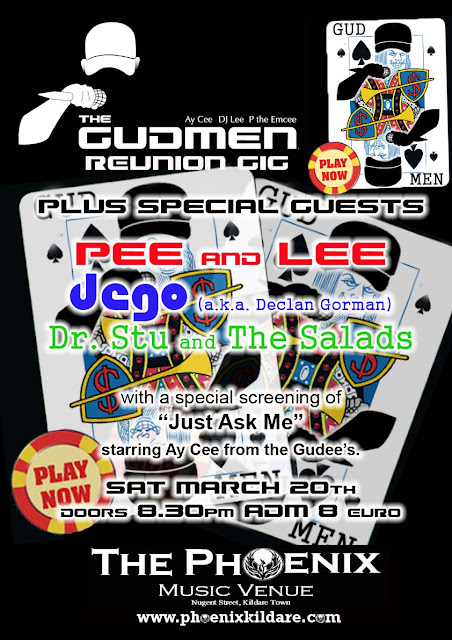 The Gudmen
http://www.myspace.com/thegudmen
Kildare and Mullingar Hip Hop Act
An Irish Hip Hop act comprising of two MC’s (vocalists) and one producer/ DJ. The band built up a steady fan base via the internet, numerous live shows including The Oxegen Festival 2006, supporting Republic of Loose and main stream radio and TV appearances .

The band then split up in 2007. But are back for one night @ The Phoenix Venue http://www.phoenixkildare.com

Also featured on the night will be a special screening of "Just Ask Me". The short film written by and featuring Allan Clarke (Ay Cee) & directed by long term Gudmen associate David Butler. The director behind The Gudmen's "Why?!" "Drunk & Dizorderlee" & "Introducing..." music videos.

Special Guests
Pee and Lee (as featured on Podge and Rodge Show)
Dego aka Declan Gorman (from Speaker Boy Records)
Dr. Stu and The Salads ( Performing the LUAS RAP as featured on Podge and Rodge Show, Oxegen Festival 2008)
Gig also features the Legendary DJ Lee from Zig and Zag's - 2 Phat, and Producer behind Des Bishops- Leim Thairt (Jump Around as gaeilge).
at 1:27 AM No comments: